I am a featured artist on pencils.com.  To read the entire article visit: 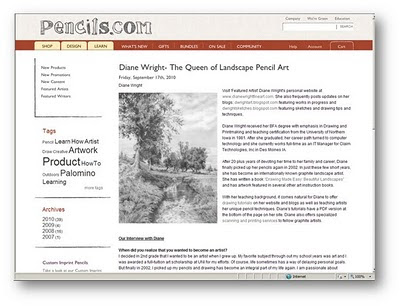 This has been a whole new approach to drawing...working in the darker tones and leading the viewer through the scene by the lighting.  Let me know what you think of this composition and style. 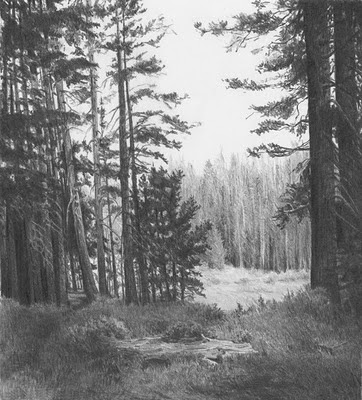 A new pencil with a completely different feel

I was selected to test out the new Palomino Blackwing pencil. The original Blackwing 602 was discontinued by Faber Castel and is now being re-introduced by the Palomino producer's Cedar Co of California.

Part of the test was to compare it to the original Blackwing as well as the Palomino HB pencil.  Since I never even heard of the Blackwing pencil until a month ago, I felt it important for me to find the real thing.  I coughed up the $$ and purchased one from ebay.  It is a pre-1958 vintage Ebarhard Faber Blackwing 602.

Now on to the comparison of the new Palomino Blackwing to the vintage model as well as to the Palomino HB .

I think the hype regarding the vintage as being the best pencil ever made, is just that...hype.  The wood in the vintage pencil was difficult to sharpen, leaving a rough texture and reminds me of why I have never cared for using wooden pencils.  The new Palomino Blackwing matches the other Palomino's top quality wood and sharpens clean with no splintering.  The new Palomino Blackwing slick design and white eraser is also much improved over the vintage model.

The new Palomino Blackwing is an unusual pencil in that it doesn't feel like graphite.  It has a carbon or clay feel to it and it doesn't leave a super shiney layer. It also compares more closely to a 2B than an HB grade in both softness and tone value.  The CEO of Cedar Co., Charles Berolzheimer, says I'm the first to make this comment. He thinks it could be that since I use a wide variety of graphite leads, I am probably very sensitive to the grades. He may very well be right on this as I use a variety of grades from 4H to 6B.

During my testing and comparison, I didn't care for the new Blackwing.  I have to be honest  and say that I did not give it a good rating when I reported back to Charles. 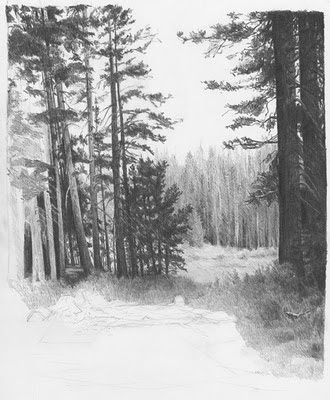 But I couldn't stop at just a few pencil strokes.  The real test is to see how it lends itself to drawing.

I am pleasantly surprised that the new Palomino Blackwing's "non-graphite" characteristics can create rich black tones that are incredible.  But I will let the drawing speak for the pencil....

Here is my current work in progress using the new Palomino Blackwing for the canopy of dark trees, a 2B .5mm mechanical pencil for the grass, and a 4H chisel point clutch pencil for the background trees (using the Blackwing to layer the darker areas on top of the 4H).  The darks lay down quickly and evenly and create a rich "black".

My final report to Charles?  This pencil is DEFINTELY a keeper and I am looking forward to pushing my landscapes to a whole new level of rich darks.  Thank you Charles!!

Diane Wright
Graphite landscape artist. www.dianewrightfineart.com Drawing has become an integral part of my life. While my favorite subject matters are rural and landscapes, I also draw portraits and still lifes. I especially enjoy doing commissions to capture a special subject matter for others! Please feel free to email me at Diane@DianeWrightFineArt.com for more information.